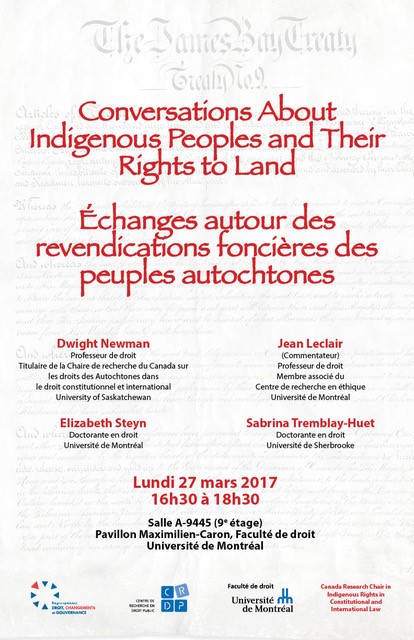 Dwight Newman is Professor of Law and Canada Research Chair in Indigenous Rights in Constitutional Law and International Law at the University of Saskatchewan.  He completed his BA at Regina and JD at Saskatchewan and his BCL and DPhil at Oxford University, with his DPhil focused on legal philosophy in relation to collective rights.  He articled as a law clerk at the Supreme Court of Canada, and he is a member of the Ontario and Saskatchewan bars.  He was a 2015/16 Visiting Fellow in the James Madison Program at Princeton University; from Jan-Mar 2017, he is a Visiting Fellow at the Université de Montréal Faculté de Droit.  He will be a Herbert Smith Visiting Fellow at the Cambridge University Faculty of Law from mid-April till July 2017.  He has published around seventy-five articles or book chapters and ten books, including two books on the duty to consult doctrine that have been cited widely in the courts.

Paper: On the Possibilities for Aboriginal Title Legislation in Canada

Born in Montréal in 1963, Jean Leclair obtained his law degree from the Université de Montreal in 1985 and was admitted to the Quebec Bar a year later. He then clerked for the Honorable Alice Desjardins, justice of Canada’s Federal Court of Appeal. After having been awarded the Duff-Rinfret scholarship, Leclair pursued graduate studies of law (LLM) under the supervision of Professor André Morel and was appointed professor of constitutional law and legal history at the Université de Montréal in 1991. In 1999, he launched a course entitled « Aboriginal Legal Issues. »

Professor Leclair’s interest for federalism has led him to author various studies on the administration of the environment in the Canadian federal structure and on the constitutional underpinnings of Canadian bijuralism. For more than ten years, he has been interested in the (re)configuration of political relationships between Aboriginal peoples and governments and the reconfiguration of relationships within Aboriginal communities. The structuring effects of law on the evolution of these relationships are his field of predilection. Professor Leclair also directs his attention to the epistemological issues created by the conjuncture of law and other areas of the social sciences. Additionally, he is working on a theory of federalism that would satisfy Aboriginal communities without requiring their members to adhere to a monistic concept of their identity.

Elizabeth Steyn is a doctoral candidate (LL.D.) and chargée de cours at the Faculty of Law of Université de Montréal (UdeM) under the research supervision of Dean Jean-François Gaudreault-DesBiens. Her doctoral research focusses on finding remedies for clashes occasioned by the intersection of natural resource development projects and sacred Indigenous sites, with specific reference to the four major common law jurisdictions: Canada, the US, Australia and New Zealand. Her approach involves a synthesis of comparative law, legal anthropology/Indigenous theory and international law. To this end she spent 4 months as a Visiting Fellow at the Max Planck Institute for Social Anthropology in Halle (Saale), Germany in 2016. She is the grateful recipient of several prestige scholarships, including a doctoral scholarship from the Fonds de Recherche du Quebec (FRQSC), and a number of scholarships of excellence awarded by the Faculty of Law and the Faculty of Graduate Studies of UdeM.

Paper: A prospective analysis of the rights of Indigenous Peoples in the Americas affected by mass tourism through the lens of the Comunidad Garífuna Triunfo de la Cruz y sus miembros vs. Honduras case