Immersive Virtual Courts: the next frontier 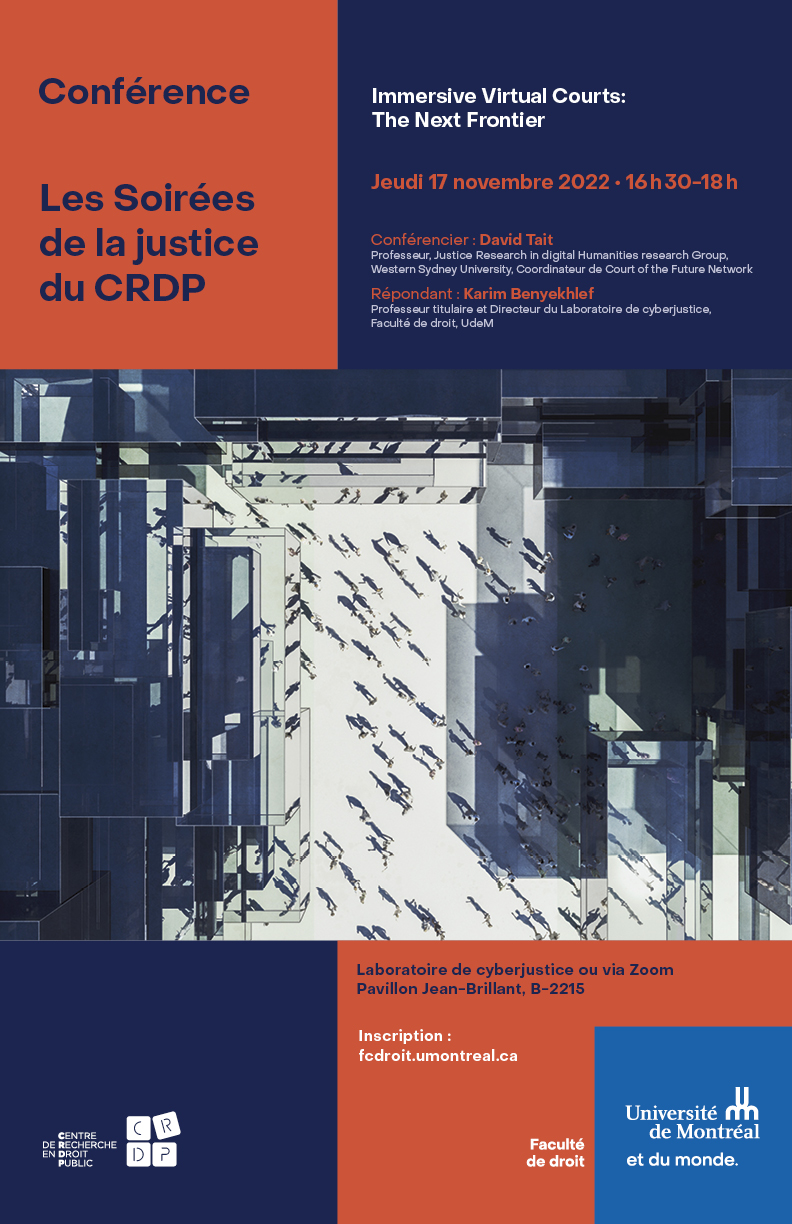 The pandemic showed the capacity of governments to shut down travel, provide massive social support to keep the economy going, roll out public health campaigns, and even solve homelessness – if only for a while. For courts the pandemic accelerated a move towards greater use of digital technologies that was already underway.  In particular, courts pivoted towards greater use of virtual court platforms to conduct many types of hearings.  Similar transformations took place in offices, schools and indeed families. The rapid take-up of communication technologies that combined sound and vision provide us with a form of natural experiment, testing out the reliability and acceptability of remote interaction to conduct justice business. It also exposed one of the weaknesses of most current video technologies – their inability to provide adequate spatial cues, including eye contact and directional sound. Most video conferencing systems in current use for courts have participants looking forward rather than at each other.  The problem is that these platforms are insufficiently immersive.

Most of the major video conferencing providers are conscious of this limitation and are attempting to enhance their platforms to make them more immersive. [Zoom has what they call an Immersive View and MS Teams Together Mode, Meta is offering the Horizon Metaverse platform for people to meet and work or ply together, as well as what they call hyper-realistic full-body holographic avatars who could inhabit spaces of the metaverse. Pexip, whose technology was used in UK court pilot studies, have special ‘immersive’ features in their video conferencing platform.  So the future is immersive. What would this mean for courts and tribunals?] Our research team has modelled different styles of immersive environment for justice hearing that embed participants in virtual courtrooms, make possible eye contact between participants, and offer localised sound cues. This conference reports about what we know so far and speculate about the future of immersive virtual courtrooms.

David Tait is Professor of Justice Research at Western Sydney University. He is Co-ordinator (with Diane Jones) of the Court of the Future Network, a group of judges, court executives, architects, engineers and scholars with an interest in justice environments and how they might be transformed in the future. He is Professeur Associé at? Telecom ParisTech, www.telecom-paristech.fr ?and Chercheur Associé? at the Institut des Hautes études sur la Justice in Paris, www.ihej.org. He is an investigator in a multi-year study funded by the Canadian Social Sciences and Humanities Research Council through the University of Montreal; the sub-project he leads investigates distributed and virtual courts, together with Professors Fred Lederer, Christian Licoppe and Meredith Rossner.

He has a special interest in justice processes, particularly how justice is performed and experienced in different cultural and national settings. This has led to research on juries, mental health and guardianship tribunals, restorative justice conferences, Koori (Indigenous) courts, court safety and remote witness communications. In this he collaborates with a range of academic fields including law, psychology, forensic science, architecture, media studies and management.

Karim Benyekhlef has been a professor in the Faculty of Law at the Université de Montréal since 1989. He has been seconded to the Centre de recherche en droit public since 1990 and served as its Director from 2006 to 2014. He was also the Director of the Regroupement stratégique Droit, changements et gouvernance (Strategic Law, Change and Governance Group), which brings together some 50 researchers, from 2006 to 2014. At the same time, he was the Scientific Director of the Centre d’études et de recherches internationales de l’Université de Montréal (CÉRIUM – the Université de Montréal’s International Research and Study Centre) from 2009 to 2012.

He is now the Director of the Cyberjustice Laboratory, which he founded in 2010. He is the co-leader of the research group Law, cyberjustice and cybersecurity at OBVIA (International Observatory on the Social Impacts of AI and Digital Technology). Member of the Barreau du Québec (Québec Bar Association) since 1985, he practiced in the federal Department of Justice from 1986 to 1989. His teaching and research areas are constitutional law (human rights and freedoms), international law, information technologies law, legal theory and history of law. In 1995, Professor Benyekhlef founded the electronic law journal Lex Electronica, the very first French-language online law journal.

He also initiated the first online dispute resolution projects (the CyberTribunal Project, 1996-1999; eResolution, 1999-2001; ECODIR, 2000-today). He now serves as Director of the Cyberjustice Laboratory, the work of which is designed to increase and facilitate access to justice